How to put on a show that will wow your audience…guaranteed!

Putting on your own show can be a daunting task. It is the one time when you go from being a performer to being a booking agent, a ticket seller, a sound technician and a promoter all in one go. You have to worry about getting bums on seats, make sure that everyone has a good time, sing brilliantly and put on a fantastic show. So how do you put on a show that will wow your audience…guaranteed?

This post is designed to explain how I took four beginner singers with no previous performance experience and in only a few short weeks, had them perform in their very own show that was not only sold out but was met with mass applause. You will hear first hand from their experiences so you can learn to put on a show of your very own.

A bit of background: A big part of being a musician for me is mentoring. I love to teach, especially when I get to work with people who are dedicated and passionate about improving their singing and advancing their technique. I also like to provide my students with the opportunity to showcase their skills and gain vital performance practice by putting on student concerts for family and close friends.

So it was four weeks till the big show. Everyone had been working tirelessly on their repertoire, perfecting their chosen songs at home and then receiving performance coaching with me. Performance craft is one thing that I feel is greatly missed in the world of singing lessons. No one ever teaches it and singers are left to learn the ropes as they go. It is one thing to learn technique, build repertoire and learn basic theory (a must for all singers!) but it is another thing entirely to stand up in front of an audience and sing. This is something that my students found. This was to be their very first show ever!

When you get up there on stage, the basic components of singing such as breathing technique and pitch go out the window. It is because as those nerves kick in, people naturally tend to breathe shorter shallower breaths and so it is important to practice your basic techniques so much that they become second nature; leaving you to focus on the one thing you will need to when you are on stage… PERFORMING.

Here is a quick little video of snippet of the concert so you can see how well everyone went. The students performing are (in order of appearance) Taeko Briggs, Margaret Smith, Anna Sasson and Clare Whyte.


When it came to performing for the first time, each of the four lovely ladies said that it was their breathing that went first. They said they felt short of breath and that nerves completely took over. So I decided to ask a few vital questions to let them share with you their tips on stage craft and what they learned from their experience.

Nicola: What are three things you have learned about performing from doing the show?

Nicola: What would you say was the one thing you felt you did really well on the night?

Margaret: My last song “Travellin’ Soldier by the Dixie Chicks was my best performance.  It is the first time I have really got connected to how sad the song is as it tells a story of a young couple’s love through the Vietnam War.  Once I got connected to the song it was easy for the audience to be connected also.

Clare: I managed to move around. At home I feel really silly singing and moving around in front of a mirror, especially if I’m feeling tired. But the audience doesn’t care if you look a bit silly or uncoordinated (after all, it’s not ballet!), they just want you to look like you’re having fun.

Nicola: What advice would you give to someone else who was going to perform for the first time?

Make sure you know your piece well enough so that when the adrenaline hits you, you can fall back into your rehearsed routine.

Funnily, the song that I was most confident about turned out to be my most shakiest performance, and the song that I was really freaking out about, turned out to be my strongest performance. On reflection, it is probably because I ended up practicing the harder song a lot more and as such, when it came to performing, the benefits of the practice really showed.

Margaret: Practice more than I did!! I try and get away with the bare minimum sometimes and had I practised my guitar more it would have allowed me to concentrate on my singing more. Also record yourself and look of areas that can be improved well in advance of your performance.

Clare: Go get meditation classes. A strong fight-flight adrenaline spike response can be a very unpleasant experience but if you learn to breathe deeply and quiet your mind you can calm your body and mind down so that performing becomes a pleasant experience.

The show went so well. We not only sold out but each performer received raving applause and I had people coming up and asking me when the next show was going to be. Hmmm… maybe its time to raise the ticket price?

Here are a few happy snaps from the show: 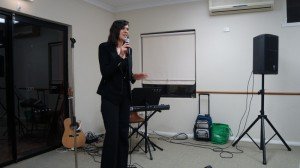 I played MC for the show 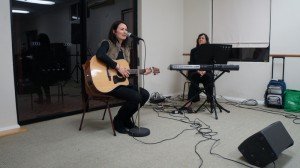 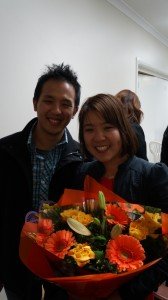 Anna was surrounded by fans!

If you have some performance tips on how to put on a show, I’d love to hear from you so please share them in the comments below.

Get started with my 4 FREE vocal warm ups.

(I'll also send you tips on how to improve your singing)