How to make your own music video for FREE!

Every singer needs a good music video these days and Youtube is one of THE BEST ways to grow your fan base. From all of my social media, Youtube brings in more fans for me than any other social media source and until recently, I hadn’t even been giving my channel much love.

Music videos are a great place to start getting amazing and interesting versions of your songs up for people to check out BUT to get a semi professional music video done you are really looking at $5k up. Back in the day (i.e before the social media boom and when MTV and Video Hits were still huge) big budget music videos would cost $15k and up!

So what about everyone else without a label/ big budget/small budget/ any budget at all??? Well, you’ll be pleased to know that by getting a little creative, you can create amazing music videos for very little cost to no cost at all.

To start things off, here’s my music video. I managed to get this done for FREE! Have a look and below, I’ll tell you exactly how I did it plus I’ll give you a bunch of other ideas and tips for making a kick arse music video of your very own.

Here’s how I got this music video done for FREE…

Yep, most of getting this music video done came down to good old fashioned relationships. Knowing people in the business. So how did I find people in the business? Well it just so happened that my sister was into acting at the time and was doing a few student movies and odd acting gigs around town (which were all unpaid btw). So she knew a few people who were into directing, producing and acting. Very helpful for me 🙂

I made the decision to look into getting a music video done for one of the songs I’d just released on my EP, and fortuitously, at a picnic with some friends a couple of my sister’s acting buddies were there and one of them was a Producer who was looking to get more exposure and build a name for himself. We started chatting about my music video and we agreed that working together would be a win-win situation. I’d get my music video and he would get a big promotion boost by creating a video for someone with an established fan base.

Now if your sister isn’t into acting, don’t worry. The globe is littered with acting groups and people who are desperate to get into the movie business. If you want to find a Producer (and Producers are the first person you need) then hit up your local colleges that are running film courses and you will find one there. Johnny’s the one on the right. The monkey was part of the crew 😉

My Producer Phil, had already decided on who he wanted to use as a Director and I really didn’t get a say in that. I wasn’t fussed though because I didn’t know anyone and I was relying on Phil to recommend good people. He picked a guy called Johnny who was uber creative and turned out to be a FANTASTIC Director, so big score there.

Jonny knew the rest of the crew which included:

I didn’t even know that I needed a Director of Photography, let alone what that person would actually do. I was just happy my music video was going ahead. Oh and if you’re wondering whether I had to pay any of these people, well the answer is no. They were all happy to be involved just to get experience.

But here’s the drawback – because you are not paying people, you really need to listen to their ideas which may be very different to what you imagined for your music video. You really have to relinquish a lot of the control to the Director and let them play their part. Directing is another very creative profession, just like being a singer is and Directors like to have the creative freedom to do what they do best; make film. You really need to just give them an idea of what you want, then be open to their ideas.

Fortunately for me, Johnny and I were on the same page and I’m definitely going to work with Johnny again in the future. Me in my sister’s prom dress. That’s Simon, my cute actor and love interest in the video. Good times.

I was on zero budget and so we had to find some way to get the equipment we needed, source a venue and organise some props. All of these resources can cost money and can effect the music video’s script. For example, if you have no cash then you can’t expect to shoot your clip on a plane or have circus animals jumping around in the background, or stunt men zooming through fire hoops (you get the picture).

Here’s a list of the things I needed to create my music video: In this pic you can see our dodgy, home made props for my ‘bedroom’.

And here’s how I sourced everything for free

Video camera and lights: Phil worked at a Film Institute locally and had access to a couple of professional level cameras and one light. Check!

Props: Johnny knew where we could get super cheap candles that were reject quality but would work for the video. It actually cost me $20 for these. No biggie.

Venue: Phil said he’d cover the $200 to hire the venue which was a school in our local area. They let us use the Church for free which had a baby grand piano in it – bonus!

Male actor: I advertised on www.starnow.com for actors and had the absolute pleasure of auditioning them for my video. (That was a FUN day – and I picked the guy I thought was the cutest out of the lot, plus we got along well) 🙂

Dress: I borrowed the dress off my little sister which was her old high school prom dress! Lol!!! Oh and I did my hair and makeup myself.

A TIP ABOUT MAKEUP FOR CAMERA – trowel it on ladies. I thought I was pretty heavy handed with my makeup but under those unforgiving lights and close camera angles, every pore was exposed to scrutiny! I really needed a lot more makeup on.

We started shooting the video at around lunchtime and went non-stop until just after 1am. It always takes longer than anticipated.

You also need to learn to take direction from your Director (funnily enough!) Its because what they see through the camera looks completely different to what it looks like to you when you’re acting. I kept stuffing up the dance scene with Simon (the actor) because:

1. I was uncomfortable acting in front of everyone (I can get up on stage and sing my heart out, but act in front of people? Different story)

2. Simon was cute and I was enjoying myself

I was worried that my butt was going to look fat and take up the whole shot, but when I saw the video later I realised my fears were unfounded. Johnny made me look great. Not a butt shot in site.

The other thing you need to be patient about is THE EDITING STAGE.

Editing is another area that can rack up the costs. In my case, Johnny was kind enough to do it for me but he took forever getting it done. I didn’t want to pester him because he was doing it for free but after waiting for a couple of months, I ended up bribing him with coffee and chocolates.

I had my very own music video in my hot little hands!!! There was one scene in the video that was badly edited, but I had to let it slide because I wasn’t paying anyone so I couldn’t be fussy (see if you can’t spot the editing glitch in my video. Hint: I’m at the piano when it happens)

So there you have it! How to get your music video done for FREE. I hope you found this post useful. I’ll put up some tips and ideas on how to create your own home videos soon. I’m about to embark on a new one myself – povo style (that means with my home video camera, zero budget again and my sister as my one and only crew member). I’ll let you know how it goes!

If you have any ideas on getting music videos done cheaply or for free, please share them in the comments below.

PS: Here are a few other shots from the music video shoot, with some extra behind-the-scenes tips for you. 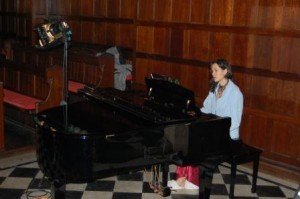 We had one light and it followed me around all evening. You can do a lot with very little equipment. The piano came with the venue fortunately. Check out my comfy footwear.

In this pic you can see the dodgy, hand made props for my ‘bedroom’. This was pretty much the whole team for most of the shoot. Two actors (including me) the Director, one crew mate, one light, one camera.

Get started with my 4 FREE vocal warm ups.

(I'll also send you tips on how to improve your singing)